Your beloved plants are run by tiny machines.  The stories of these machines are absolutely fascinating and worth a moment of your time to learn about.  It’s should be noted that if these machines didn’t exist, neither would you.

18.5% of your body is made of carbon.  We can thank RuBisCO, our first “tiny machine,” for virtually all of that carbon.  In nature, carbon is typically trapped in oxidized form, like in carbonate rock and carbon dioxide.  RuBisCO changes all that.

RuBisCO is the most abundant protein on the planet and exists in every photosynthetic organism from the lowly plankton to the mighty sequoia.  It is produced all over the globe at an estimated 1000 kg/sec.  It’s an enzyme, which we are referring to as “tiny machines” in this article and is located inside chloroplasts, the cell parts responsible for photosynthesis.  Living organisms use enzymes to help build or break up molecules.  In the case of RuBisCO, this enzyme takes atmospheric carbon dioxide and helps turn it into sugars.  These sugars make up almost all of the dry weight of a plant as well as almost all of the biological energy in the world’s ecosystems.  RuBisCO is a very big deal.

RuBisCO is an elegant barrel shape. This shape optimizes a number of locations on its outside that do the all important work of extending carbon chains using carbon dioxide.  As the carbon dioxide and carbon chain come together, RuBisCO squeezes them together and Pop! another carbon is added.

As wonderful as RuBisCO is, it’s not perfect.  While many enzymes can carry out thousands of reactions a second (mind blowing, I know!) RuBisCO is capable of only 3 to 10 a second (still amazing, though).  This inefficiency is a major reason why it’s so abundant – you need a lot of the enzyme to do a little bit of work.  If that wasn’t bad enough, 1 out of 4 times it operates it accidentally uses oxygen instead of carbon dioxide.  Adding an extra oxygen to the carbon chain creates a toxic by-product that plants have created very elaborate ways of disposing of.

Because of the importance of RuBisCO and because its slowness is often the top factor that impedes photosynthesis, a very active area of genetic engineering research is on improving its performance.  Typically this research involves putting the genes of one organism’s RuBisCO into a cash crop like wheat or rice.  So far no luck, but research is ongoing.

As the Sun moves overhead, squadrons of millions of chloroplasts move towards or away from the brightest part of

their cell (to capture as much light as possible or to flee from getting too much light – a real and underappreciated danger).  These daily, microscopic migrations are all thanks to the enzyme myosin.

One of the most delightful things about myosin is how much it looks like a tiny man walking on a tightrope.

You have myosin, too.  It’s what moves your muscles and is critical to the movement that results in your cells dividing.  Holding up the weight of a baseball in your hand takes 2 trillion myosin molecules working inside you!  That’s amazing!

We saved the best for last.  Undoubtedly, ATP synthase is one of the most important enzymes on our planet.  Here’s how it works:  The energy from light hits your plant.  That energy changes the shape of the electron cloud around very specific molecules in your plant.  That change in shape increases the likelihood that a particular reaction takes place that splits water into the oxygen we breath and hydrogen ions.  It’s these hydrogen ions that are key.  Over time, these hydrogen ions continue to build up in very specific parts of your plant’s cells.  This build up of hydrogen creates a pressure quite similar to a dam.  This pressure flows through ATP synthase just like a turbine.  As this turbine whirls it crushes together two molecules to build the world’s most important energy molecule – ATP. 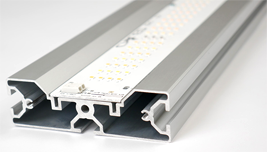